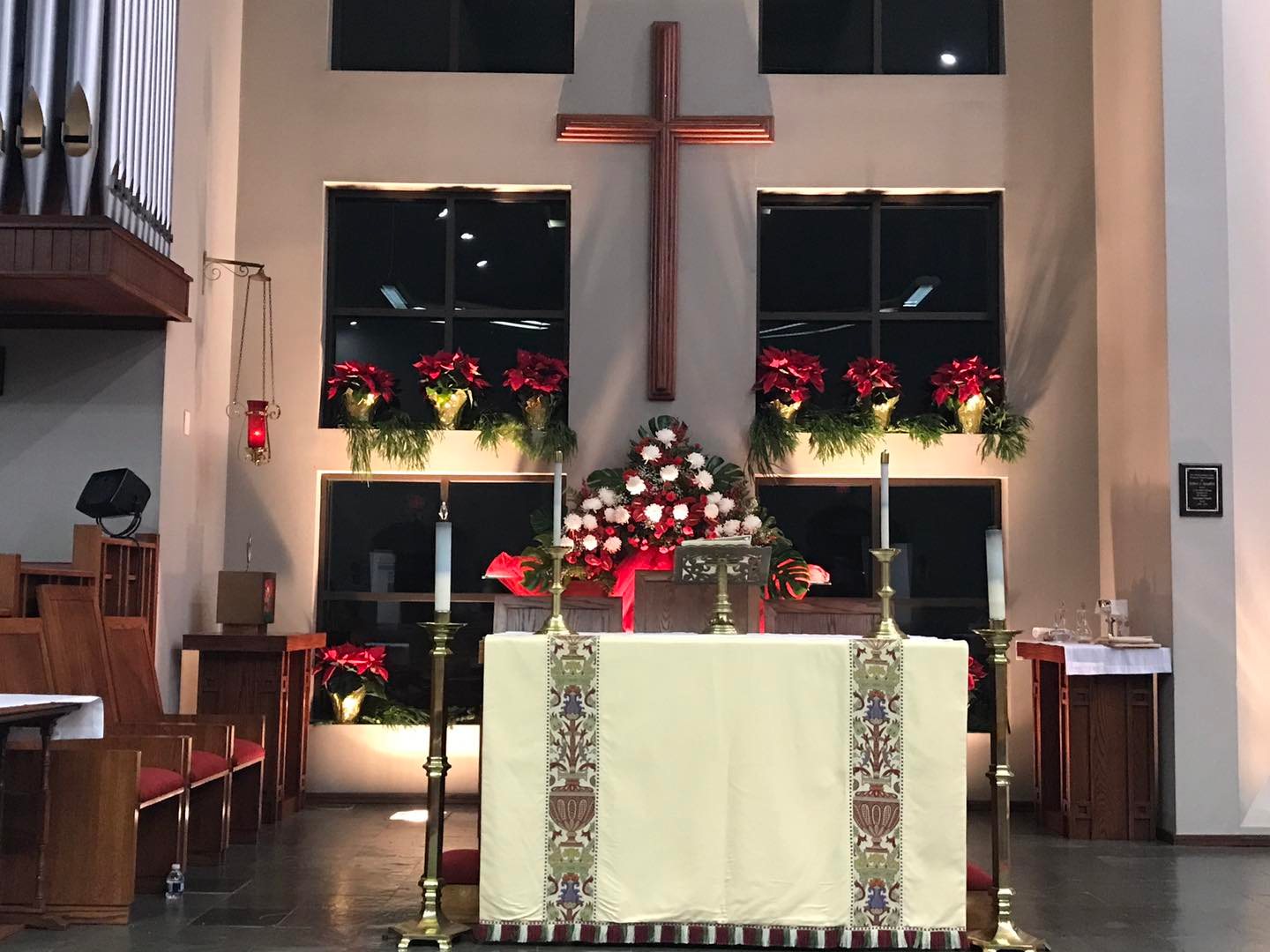 We welcome you to God’s House.  Our prayer is that your life is enriched by the worship experience here on Peyton Rd. We are so glad that you are here!

St. Paul’s is a dynamic faith community. If you are looking for a spiritual home to become a part of, please know that you have found such a place here. Come worship with us on Sunday at 10am. We are one and all are welcome at St. Paul’s. Welcome home!

To Proclaim God’s love, justice and hope through the witness of generations of resilient faith in Jesus Christ, and the worship and traditions of the Episcopal Church, seeking to make disciples and to draw our neighbors into a relationship of love, strength and hope. 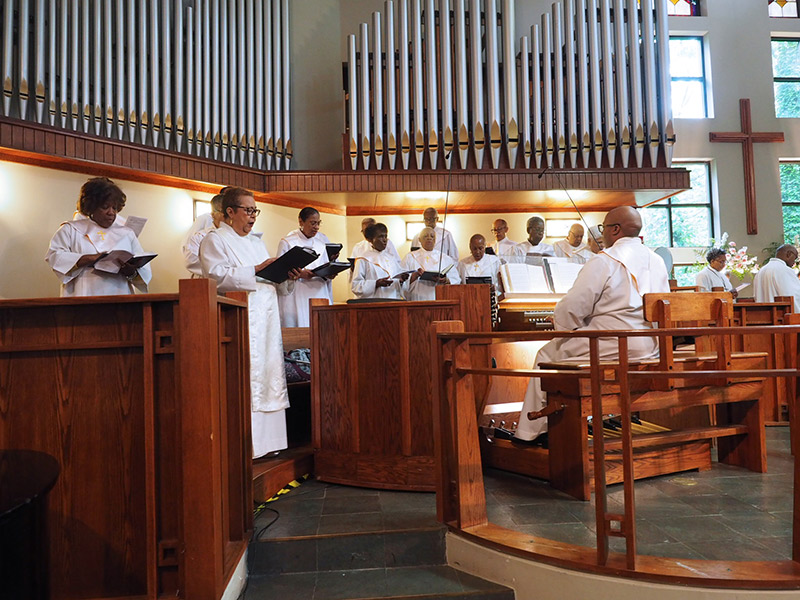 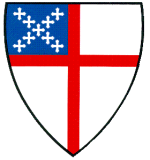 St. Paul’s Episcopal Church is the oldest black Episcopal Church in the state of Georgia. In 1880, some fifteen years after the Civil War, a small group of Blacks organized a Sunday School in Atlanta. This small group later petitioned the Episcopal Diocese of Georgia for status as a Mission. The petition was granted and the Mission became St. Paul’s which held services in an upstairs loft in the West End area of Atlanta. This small group later moved to a location at the corner of Peachtree and Auburn Avenue and then to a building on Butler Street. 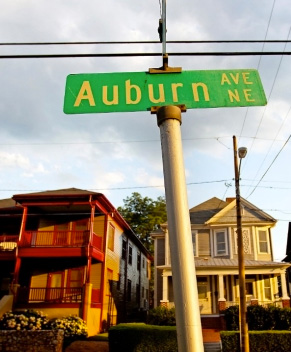 In 1895, The Reverend William A. Green was named Minister-in-Charge of St. Paul’s. Father Green moved the church to a new building on Auburn Avenue. During the next decade, membership at St. Paul’s grew and in 1898 Father Green saw the need to establish another Black Mission on Lawshe Street known as St. Matthias. The two missions continued to grow and prosper under the Reverend Henry Simons, who succeeded Father Green for a short time, and the Reverend Albert Eustace Day. 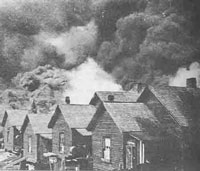 After the untimely death of Father Day in 1917, the Reverend Aubrey Anson Hewitt was appointed the vicar of St. Paul’s. During that same year, a devastating fire engulfed a seventy-three block area in the city of Atlanta including the church building and destroying all of its records. They were forced to worship where they could find space, including storefronts and at other times a theater on Auburn Avenue. In desperation, Father Hewitt and Dr. Edward G. Bowden, a dedicated parishioner, appealed to the Diocesan authorities for help. 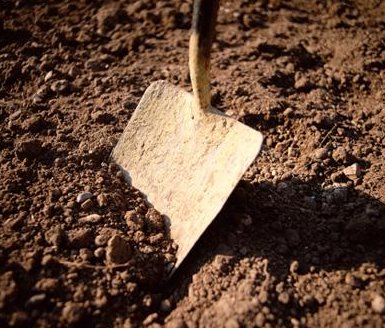 In 1918, The Reverend E. L. Braithwaite was called from St. Stephens in Griffin, Georgia to St. Paul’s. Bishop Henry J. Mikell also appointed Father Braithwaite the first Archdeacon for Colored work during the same year. With the rapid expansion of the Black population of Atlanta in the 1920’s, St. Paul’s was a promising mission with increased membership and needing larger facilities to carry on the work of the church. Bishop Mikell assisted the congregation in raising the necessary funds to build a beautiful new Gothic church building on Auburn Avenue and Fort Street. The building was dedicated in 1924.

The Reverend H. Randolph Moore succeeded Father Braithwaite as Archdeacon for Negro work and Priest-in-Charge of St. Paul’s in 1926. It was under Father Moore’s leadership in 1929 that The St. Matthias and St. Paul’s missions were combined and operated under the title St. Paul’s Episcopal Church. The building at 135 Ashby Street was remodeled and became the new home of St. Paul’s Church in September 1933.

The Reverend Samuel C. Usher became Priest-in-Charge in 1947 and accomplished several milestones through his leadership. St. Paul’s membership increased and it became a full-fledged parish at the 47th Diocesan Council in January, 1954. During the year the church was incorporated with a board of trustees and officers. Father Usher served St. Paul’s Episcopal Church for thirteen years. The Reverend Adolphus Carty followed Father Usher in 1961.

In September 1964, The Reverend Robert Boyd Hunter became Rector of St. Paul’s. He had an avid interest in social activities, political and community issues, and believed in community involvement. High on Father Hunter’s list of priorities was securing new facilities for St. Paul’s. Under his leadership, the congregation moved out of its old facilities into temporary headquarters at M. Agnes Jones Elementary, an Atlanta Public School. Ground was broken for a new building on June 16, 1968. The new church facility located on Peyton Road was dedicated on June 22, 1969. 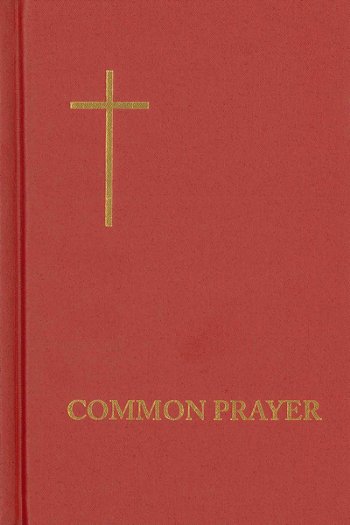 On April 25, 1977, Father Edward L. Warner became Rector of St. Paul’s. He continued the work of The Reverend Cornelius Wilson in continuing to introduce the new Book of Common Prayer adopted by the General Convention. Father Wilson was a supply priest at St. Paul’s before the arrival Father Warner. Thus, all sacraments, rites and ceremonies outlined in the new book were adopted for use at St. Paul’s. Father Warner was involved in some of the preparatory work for the new book enabling him to lead St. Paul’s in its full implementation. 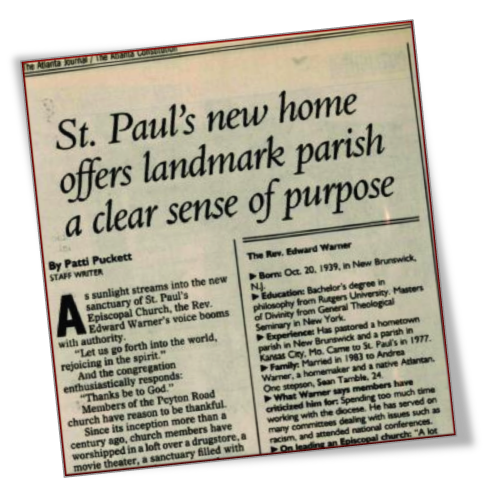 Under Father Warner’s leadership, church leaders and the congregation perceived the idea of expanding the present site to include a new sanctuary. The necessary funds were secured and the new building was completed and consecrated on September 24th, 1994 by Bishop Frank Allan. The vacant property adjacent to the church was purchased for future expansion under Father Warner’s leadership. 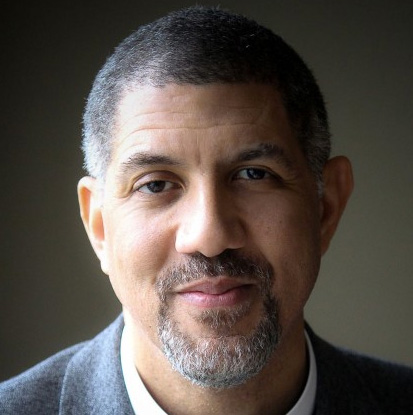 In July, 2002, The Very Reverend Robert C. Wright became the Rector of St. Paul’s. He was preceded by The Reverend J. Bernard Rosser, who served as Priest-in Charge, until his arrival. After the arrival of Father Wright, the church experienced phenomenal growth. Through outstanding preaching and teaching along with multi genre music, the church gained an international reputation. The choirs performed in venues around the diocese as well as nationally and internationally. The choir has performed jointly with other church choirs in the Metro Atlanta area to produce outstanding musical productions.